In our last post about the Pocket Samurai, we spoke about some of the ways carrying a pocket knife is handy: things like opening boxes, first aid, making fires, peeling fruit, and even protection. But do you know what type of knife is right for you? If you’re new to pocket knives or the concept of “EDC” (everyday carry), there can be a lot of unfamiliar terminology, and/or not knowing where to start. We want to clear that up! The great thing about pocket knives, is that there are so many types and varieties, and something right for everyone!

First, we’ll talk about size.Pocket knife blades come in a range of sizes - anywhere from very small (think only 2”), all the way to 7” and above! While the blade length is a personal preference based on what you’ll be using your knife for, keep in mind that most states and countries have size restrictions for what you can carry with you in public.

One of the best benefits to a blade 2.75” or under is that they’re legal almost everywhere. Many knife laws set the legal length at 2.75” or under, so by having a blade at this size, you’ll be compliant with almost all knife laws.

Small blades are also less cumbersome than larger ones. They’re great for everyday carry, and are handy when needing a small blade to open packages, peel fruit, etc.

This size range works well for everyday carry as it’s small enough to be mobile, but large enough to tackle more obstacles. This blade range features many locking mechanisms allowing you to “push it” during strenuous tasks, and they’re ideal for small things to heavy duty. Again, please be aware of your local knife laws, as they may have special size restrictions.

Blades at 4” and over have many of the advantages of larger fixed blade knives, but are much easier to carry discreetly. Although these blades tend to be heavier, and thus more cumbersome to carry, they might not be ideal for everyday carry. When getting into this blade length range, definitely be aware of your local laws, so that you’re within compliance.

Although there are many types of blades (and shapes), we’re going to focus on 3 of the most common blade edges: Plain edge, partially serrated, and fully serrated. 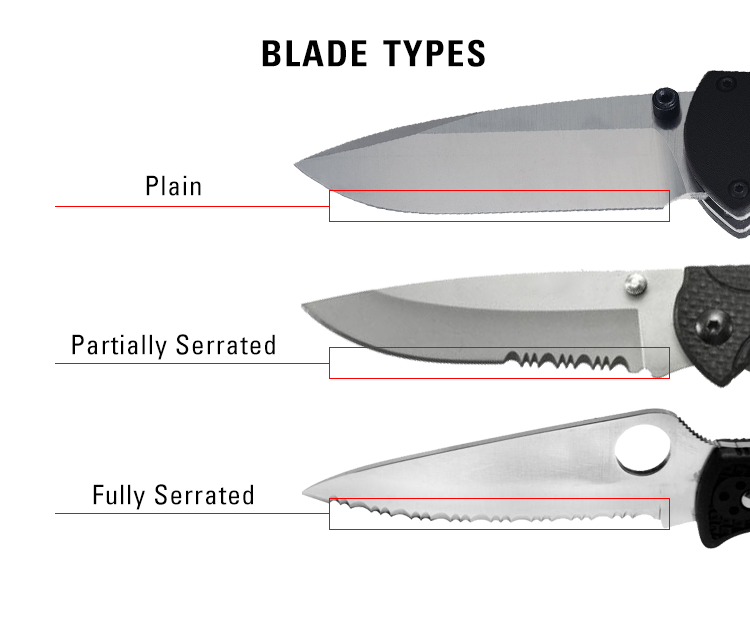 Plain edge knives are thought to be much better at performing push cuts. The single sharp edge allows for better control, more accuracy, and cleaner cuts. Another huge advantage is that plain edges are much easier to sharpen yourself. A major downside to the plain edge is it’s inability to saw and perform pull cuts. If you find yourself performing push cuts throughout the day, a plain edge blade is a great fit!

Unlike the plain edge, a fully serrated blade is best for hard cutting, and sawing. It does a better job cutting tougher materials (i.e. wood, rope), as it’s strength comes from the higher pressure per area because of the serrations. These blades tend to be thinner, which allows for them to cut better than plain edge blades, however, they’re more difficult to sharpen because of it’s blade edge(s).

The partially serrated blade is considered “the best of both worlds”. It’s very popular for it’s ability to push cuts and the serrated edge for more rigorous cutting. Even though it has a partially plain edge, it’s more difficult to sharpen yourself (but can be done!)

There are many knife points. Above is an overview of some of the most common blade tips you’ll likely come across.

The drop point is a great all-purpose blade. The dull section of the drop-point blade runs straight from the handle, eventually sloping down gently to meet the sharpened edge and forming the point.

Drop-point blades are usually found on hunting or survival knives, but they can also be found on some larger models of Swiss Army Knives.

The clip point is one of the most popular blades in circulation today. The back (unsharpened) edge of a clip point has a concave shape, designed to make the tip sharper. This creates a "cut out" area that can be straight or curved. Clip-point blades are great for everyday needs, but can also be used for hunting.

* Since clip points have a narrow point, it's better for piercing and the deep belly makes it optimal for slicing.

The straight-back blade is also referred to as a normal blade because it's a very traditional blade shape. The front of the knife has a curved edge while the back has a straight, dull back that allows for additional pressure.

* This blade makes for an all-purpose knife ,great for chopping and slicing, which is why it's a design you often find on kitchen knives.

A needle-point blade is symmetrical and sharply tapers into a point. The thin point is great for piercing objects, but it's very vulnerable and can break pretty easily. Needle-point blades have two sharp edges, but the lack of belly makes it difficult to use for slicing. Needle points are much less common on folding knives, but they can be found on certain knives like stilettos.

* The specialty of the needle point is piercing, so it's not good for much but it can be a great asset for self-defense.

Ideal Use: The spear point is best with piercing, but unlike the needle point, it has a belly that allows for some slicing.

* A tanto has a high point with a flat grind, but no belly. It’s point is not an all-purpose blade, but its design makes for a great EDC as its great for push cuts and piercing tougher materials.

If you're clumsy with a knife, do yourself a favor and get a sheepsfoot blade. Though ideal for cutting and slicing because of its flat cutting edge, a sheepsfoot blade has a dull point that makes it difficult, (though not impossible) to injure yourself.

* Sheepsfoot knives are popular among emergency responders, as they allow them to slice away at seatbelts and other restraints without stabbing the victim by accident. They were originally made to trim a sheep's foot, which also makes them good for whittling.

A trailing-point blade has a back that curves upward to make a deep belly perfect for slicing. This design is fairly lightweight, but the point is very weak.

* The large cutting area makes the trailing point ideal for skinning and slicing.

This tiny blade is often found on Swiss Army knives. The dull and sharp sides of the blade slope at the same degree, making it appear similar to a spear point.

* These knives were previously used for sharpening a quill in order to make writing instruments. Though not exceptionally sharp, a pen blade is a great tool to have in your pocket and is perfect for small tasks.

Another aspect of the pocket knife to be considered is the opening mechanism. The speed and comfort with which you engage your knife can be the difference between life and death but also a matter of convenience when doing everyday tasks. There are 3 general categories to choose from.

The switchblade, which automatically engages with the push of a button or switch, was outlawed in the United States because of its perceived danger toward society. Since then, states have slowly been legalizing switchblades, whether outright or with some restrictions. The federal law also has some exemptions that allow use of switchblades for law enforcement, military and those with one arm. Before buying and carrying a switchblade, it's important to research your local knife laws to make sure you’re within carrying compliance.

The liner lock works with one section of the liner angled toward the inside of knife. From here, the liner is only able to go back to its old position with manual force, thereby locking it into place. If the user wants to disengage the lock, they have to manually move the liner to the side away from the blade bottom.

A frame lock is very similar to a liner lock. A frame lock works by utilizing the knife’s handle to assist in folding the knife. The blade is released by applying pressure to the frame. When opened, the pressure on the lock forces it to snap open across the blade.

A slipjoint is commonly found on traditional pocket knives, but doesn't actually lock the blade in place. The blade is held in place by tension from a spring or flat bar. Once enough pressure is applied against the blade, it can move back to the closed position. Slipjoint knives aren't designed for heavy duty work but for light, everyday tasks.

Backlocks have a manual release mechanism toward the butt end of the knife.

Mid locks resemble back locks, except for the fact that the release mechanism is in the middle of the handle spine as opposed to near the butt end of the knife.

We hope this guide provided some insight into the different types of knives you can expect to find in the market.